Promotional Tennis Balls for your club or promo

Get the right Tennis Balls for your promotion - delivered Australia-wide. Click the images for pricing of balls including logos or message.

With interest and participation in the game of tennis always being high in Australia, the humble Tennis Ball has proven to be a popular promotional vehicle when printed with club or corporate logos. When you contact us here at Sportsballs.com.au we will be supplying you balls from SPORTS1 a fast growing supplier that is dedicated to only selling the highest quality custom made balls. Ensure that your next promotion is a hit with one of these exceptional items coming to you at an economical price point while not sacrificing on quality!

Our SportsBalls.com.au staff are ready for your questions - please call us at with your query - our staff are here to assist you with your enquiry and order. Remember - we are the nation's best value supplier and will not be undersold on a comparative specification of tennis ball! 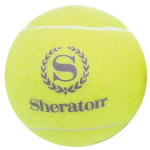 A tennis ball direct from the factory in India for grea ... 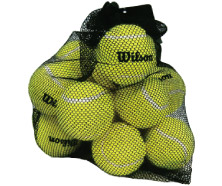 A bag of 18 Wilson Tennis Balls. This pressure-less ba ...

Keep on your game with these high quality Wilson tennis ...

Tennis is one of the most popular, and most lucrative sports for players in the world. With players representing almost every country on the planet, it is a truly international sport.

Tennis is an ancient game, with its ancestry dating back to 12th century France, where the game was played as a ball struck with the hand. Louis the 10th was an advocate of the early game that developed into the tennis that we see all over the world today.

Tennis features a number of different surfaces that can be played on - the most common being grass and clay courts. However, there are a number of other Tennis Court Types , such as hard courts (such as concrete, acrylic and asphalt), carpet courts and even wooden courts.

Tennis features a unique scoring system, with each individual rally being called a game. The first player to win 6 games by a margin of two (6-4 or better) wins the set, with a best of five sets per mens match, and a best of three sets per womens match.

Tennis can be played as both a solo and as a partner based sport, high level international competition exist for both forms of the game, and many singles champions also represent their nation in the doubles tournament during the same competition. Tennis requires exceptional physical stamina, with many matches lasting over 3 hours each.